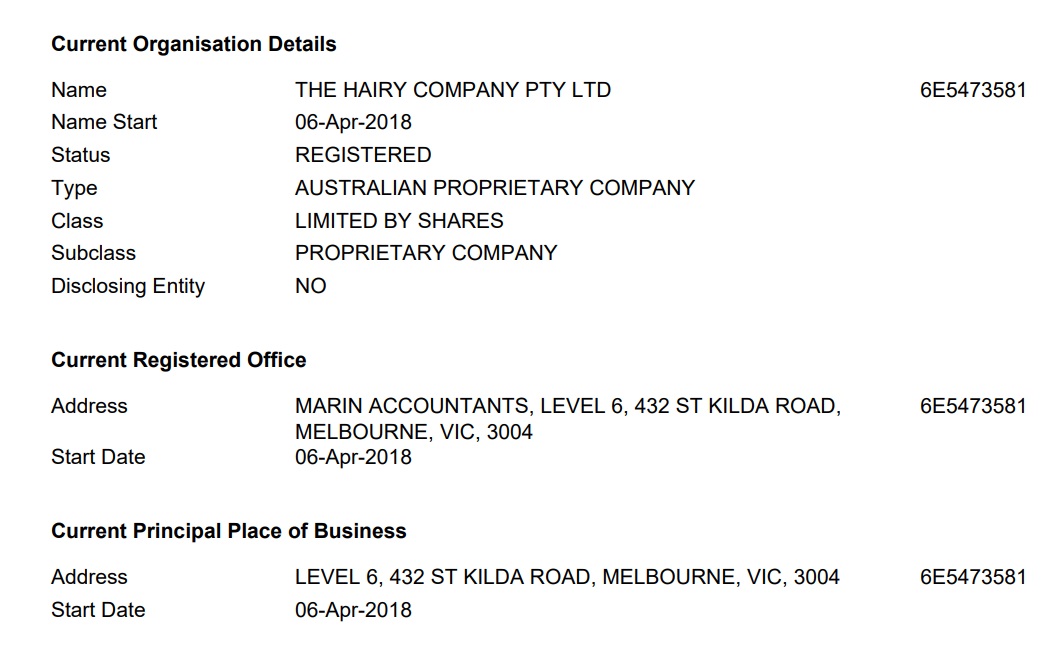 So who is this company The Hairy Pill?

The Hairy Pill is just a business name.

The outfit that owns it is called The Hairy Company Pty Ltd.

The private company with 2000 issued shares and three directors, that trio also being the shareholders.

The non-paying bookie Noah Rose owns 7000 of the shares.

He is a marketing and IT guru, and is the online man.

Sinclair is a Professor of Dermatology at the University of Melbourne, and runs a highly successful private practice named Samson Clinical Pty Ltd.

He is the medicine man.

The company is registered to an accountancy firm’s office in St Kilda, an address that ASIC records show as The Hairy Pill’s principal place of business, which is rather odd isn’t it?

How many accountants run a side show manufacturing and distributing pills?

Not many you wouldn’t think.

So what exactly is this Hairy Pill?

Well that is a good question.

The welcher and his crew won’t tell you.

They say that (and I quote):

In accordance with the Therapeutic Goods Act 1989, advertising prescription-only medication directly to consumers is not permitted in Australia. Therefore, unfortunately we are unable to disclose the active pharmaceutical ingredients on our website, which is classified as a medium for advertising.

This is both a half truth, and a big lie.

What the Therapeutic Goods Act 1989 actually says is that non-prescription medicines may not be advertised at all.

The Hairy Pill company is quite likely in breach of this law, for it’s whole website is dedicated to exactly that – advertising The Hairy Pill.

The Act also says that a company is absolutely allowed to publish the Consumer Medicines Information (CMI) related to their product.

This CMI details the active ingredients of the drug, in this case The Hairy Pill.

Noah Rose and his partners are telling porkie pies, and the reason they are telling them is because they don’t want you to know what is actually in The Hairy Pill.

Because bookies being bookies, Noah the shark is clipping the ticket and robbing his bald punters blind. 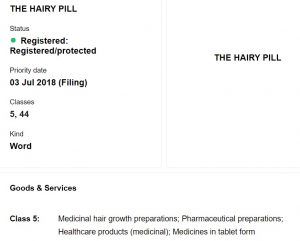 The active ingredient in The Hairy Pill is a blood pressure drug called Minoxidil.

The Hairy Pill company charges you $75 a month for exactly the same thing, minus the non-active diuretics and other bits and pieces that they put in their compounded pills to make them appear different. 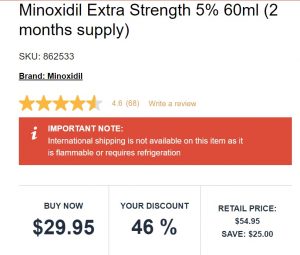 The other reason they don’t want you to know what’s in the Hairy Pill is that it doesn’t really work, not in any major fashion anyway,

And when it does work it can give you heart disease, blinding headaches, itchy eyes, rashes, and bulbous outbreaks on your skin.

Don’t take my word for it, listen to the world renowned experts from the University of Thailand, doctors and professors who aren’t usually afraid to have a crack.

They say don’t go near the pill with a barge pole.

Oral minoxidil is mostly metabolized via the liver by conjugation with glucuronic acid.

Pericardial effusion caused by minoxidil occurs around 5% of patients with unknown mechanism.

Pulmonary hypertension due to increased pulmonary artery pressure and high cardiac output from minoxidil has also been described.

In our opinion, the benefits of the oral medication are not sufficient to justify exposure to the risk of potential side effects.

That’s a cracker isn’t it?
You get a few strands of extra hair if you are lucky and then you risk dropping dead like Warnie.
And according to the Professor himself, the best you are going to do is reduce or slow down your baldness, and stimulate partial hair regrowth.
Yeah, everyone wants a comb-over don’t they?
I will take the smooth scalp thanks.
After all, as Professor Sinclair himself says, there is no known cure for baldness.
Nevertheless, the step right up, step right up and come in spinner spruik continues apace.
On the company website the The Hairy Pill mob claim the following:
It’s never really too late to start treatment if you want to try and stop further hair loss and stimulate hair growth. We have male patients from 18 to 85 and there is no telling how much hair you can regrow until you start treatment. In general it will take around 30 years of a hair follicle not producing hair, for the stem cell inside the follicle to die and make recovery impossible.
This isn’t quite true either.
Clinical research studies have shown that men under 40 who who take Minoxidil and it works grow about 70% more hair strand per cm2 than men over 40, and once you hit pension age you are pretty much wasting your time and money.
https://www.ncbi.nlm.nih.gov/pmc/articles/PMC7649170/
So, in summary.
A bookie sells hair loss prevention pills out of his accountant’s office at St Kilda.
He sells them at a 500% mark up on the available retail price.
The pills may or may not help you grow some hair back, but they are no chance in a million of curing your baldness, and you are about London to a brick on to lose more along the way than you grow.
You may or may not have a heart attack or develop huge cysts on your skin and end up looking like the elephant man during the process.
And I haven’t even begun telling you about how The Hairy Pill’s owner Noah Rose welched on a bet at his other company Bet Deluxe.
Oh well, tomorrow’s another day.
See you then.
https://www.youtube.com/watch?v=2qDMztnuLx8