As is well known, prior to turning to race writing I was a trade union official for many years, quite a senior one too. I was good at what I did when I tried, which wasn’t all the time because I had undiagnosed PTSD and it interfered with my senses. But all in all I was well up toward the top of the chain when it came to the skills of activism to get an outcome, and like me or hate me few in the union movement would disagree, including my former partner in strike Sally McManus, now the secretary of the ACTU. 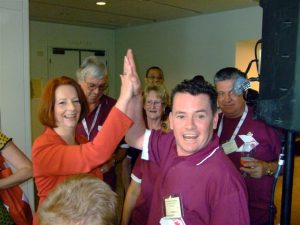 I am not saying all this to show off or boast – it’s just a fact – but instead I am saying to establish my credentials to be able to offer a critique of Cameron Partington’s performance as the head of the QLD Trainer’s union, which they call an association. Same horse, different jockey: it’s a lobby group for the trainers to get the outcomes that they want and need.

What they need right now is to have the Ipswich track racing, so that they are not being financially smashed by missing a major midweek meeting that should have been run, and having their horse’s well-planned preps totally stuffed up in the process.

$251 000 + $18 000 in QTIS bonuses was up for grabs at this meeting, more than a quarter of a million dollars. That is big dough in any person’s language, and the trainers missed out on racing for it when they shouldn’t have, it’s as simple as that.

And the reason that they missed out on it is because the track is rooted, and it has been ever since the $30 million reconstruction, which is as clear as the nose on your face, but is a fact that no-one whose job it is to say so wants to tell the truth and admit it.

Gutless, that is what they are, and Cameron Partington is gutless too.

If you had another choice, who would want to a member of a union/association whose leader says this when his members have just been ripped off $269 000.

To say trainers are disappointed or dissatisfied is a gross understatement.

Why pussyfoot around the issue with wanky soft cock words?

This is bullshit, that’s what’s you say, not in the media but behind closed doors to Pins Parnell and the Racing Minister Grace Grace in the urgent meeting that you have had called because you have done your job so well that you have the pull to force such a meeting.

That is how you do it.

ATA has been working extremely hard with RQ and QRIC over the last few months on the long standing problems and concerns around track preparation in Queensland. We thought after many recent discussions and meetings the worst was behind us.

So instead of kicking arse on the Ipswich issue, Cameron Partington has been sitting in on consultative committee meetings eating free RQ supplied morning tea nodding his head up and down while they talk in broad terms about issues with track preparation across the State.

Not even the genius Navesh Ramdani could prepare this Bundamba track fit to race in the rain. It’s rooted, from the base up. It is not an issue for or about the track staff, it’s an infrastructure matter, and a bloody urgent one too.

As recently as a trainers’ meeting yesterday we were assured the failures of the past had been learnt from and measures were in place to ensure instances like today at Ipswich couldn’t happen again.

What does this mean?

Yesterday over morning tea at Deagon they said they’d fixed all the problems?

Really? How? What did RQ do?

An even better question.

What did Cam Partington do to check it?

Did he go out to Ipswich and have a look?

Of course he Friar Tucking wasn’t, because he is a bum who is not doing his job properly.

I would be embarrassed if it was me. But it wouldn’t be, because I do my job properly even at quarter pace. I don’t know what pace Partington is going. Backwards it seems to me.

We are not blaming the Club here directly, the recent weather events have made track preparation difficult.

What, it’s rained in winter?

Oh dear, it’s global warming and the icebergs are melting.

The major concern is ensuring RQ track experts are on the same page as both the Club curator and the stewards who ultimately decide if a track is safe or not.

No it’s not Cameron.

The major concern is fixing up the various issues at the Ipswich track from the 1500m mark to the 700m mark.

The bit that is fucked.

This is not a problem with the Stewarding.

Today’s Chief Paul Zimmerman is as good a stipe as they come.

He is just doing his job to keep jockeys and horses safe.

It is the track that is the problem!

Attention to this issue should have been brought to all parties yesterday, and that’s when a decision such as today’s needed to be made, which would have made it a little more palatable for the industry to accept and offer more options for connections.

So Cam didn’t go to the track, or get any of his trainers to.

He just went to the consultative committee meeting with the free morning tea.

In his world view, RQ – who hadn’t been near the track – should have told him it was too wet to race, so they could have shaken hands, extended the meeting out past lunch, and negotiated some ridiculously underweight outcome like half the races (and prizemoney) being redistributed to a Saturday metro meeting, and the rest of it disappearing.

Wouldn’t it have been better if Partington had been out at the track on Tuesday morning talking to his members who work their horses on it, and having a stroll around the circumference a couple of times himself so he would know exactly what the state of the track was, and couldn’t get bullshitted by RQ officials who couldn’t have had a clue either?

It’s not rocket science is it?

The only positive from this fiasco today is that finally it might force RQ & QRIC to acknowledge the importance of getting this right and take appropriate action.

You know what Mr Partington?

It might force your own members to acknowledge the importance of getting it right too.

I hear that people are talking about setting up an alternative to the QTA.

In my opinion it’s probably a damn good idea.