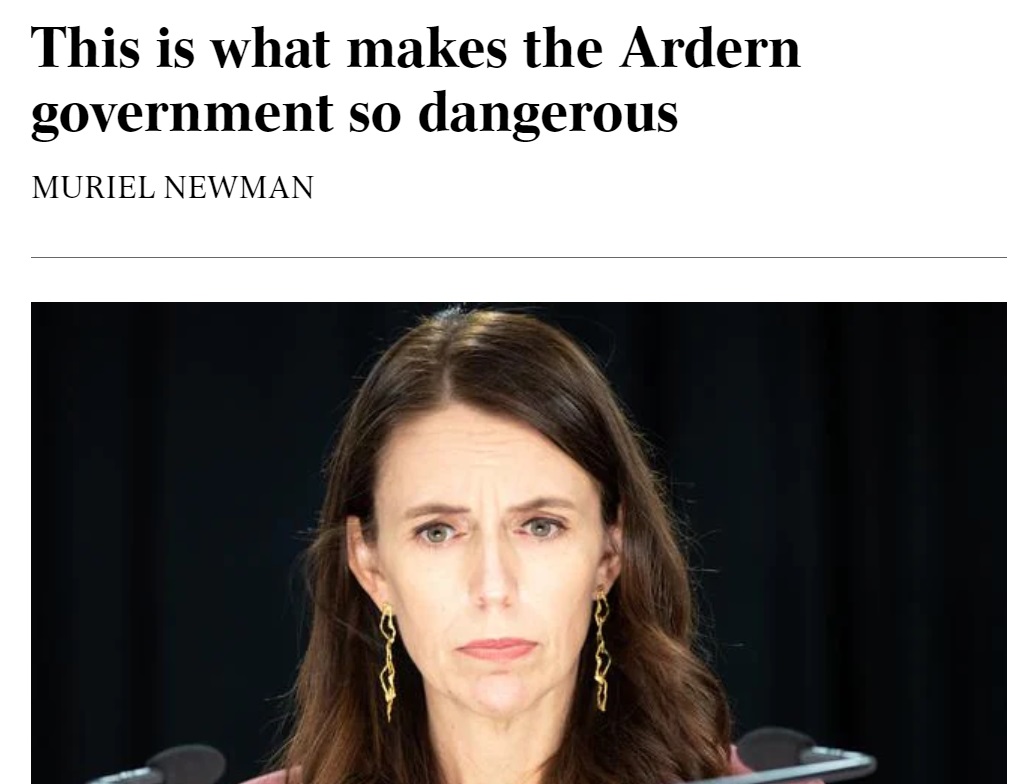 You can read it here.

In the article, Newman inferred and all but stated that NZ Prime Minister Jacinda Arden was Josef Stalin, and her government were leaders of a repressive, totalitarian regime that ‘destroyed’ lives of unvaccinated people.

What she was referring to is the police finally moving in to disperse a bunch of largely* pot smoking, dole or pension bludging, wouldn’t work in an iron lung, IQ challenged, believe in pixies, cults and aliens style weirdos from the grounds of Parliament House, where they’d been sitting for a month avoiding work, pissing and shitting, on the lawn, painting swastikas on the walls and ‘Jew!’ in innocent citizen’s cars, setting fires, blocking normal people’s path to work, trashing the place, and generally carrying on like pork chops for nearly a month.

You know, the sort of people you’d cross the road to avoid, and would call the police on 000 (111 in NZ) to come and remove if they jumped over your fence. In other words, a bunch of predominantly* dickheads, who were taking up a space of national reverence and significance, denying the 99% of the public who agree with my views access to the lawns of their own house of democracy, and trashing the joint while they did it.

This is not a peaceful Aboriginal Tent Embassy we are talking about here. This is one step away from the 2000 lunatic Trump fanatics who invaded Capitol Hill last year and injured 138 police officers that were trying to protect democracy from a crazed, violent attack by a bunch of fuckwits who believed that votes don’t matter if they lose, because they are right and the democratic majority – us – are wrong. (Sounds a lot like the animal activists trying to shut down racing doesn’t it, minus the violence and guns).

About two of the hundred and more people that I talk to in New Zealand every fortnight supported the protest. It had to be stopped, and it had to end.

PM Jacinda Arden didn’t want to send the troops in. She has a natural predisposition to supporting the right to freely protest, and is a peace loving person and a very nice one too. I say that as someone who knew and had a fair bit to do with her when I was living for 6 years in New Zealand, and who is still very good friends with her closest mates. These people are about as far from Stalin or Putin as you could ever get, and abhor police control, oppression and any form of violence. You can take that gospel, and a cheque that go down and bank.

Dr Muriel Newman – who is a doctor of pure mathematics, not medicine or people – disagrees. She said in The Australian that the removal of the protesters was a despicable, violent, totalitarian and a gross denial of the fundamental freedoms that we, in a democratic society take for granted. Basically she painted Jacinda Arden as a violent thug, which is absolute bullshit.

Most of the things in Newman’s article are.

So are The Australian.

But Dr Muriel Newman is also a politician, a woman who spent 9 years in Parliament as a member of the ultra-right wing party ACT, including a period as it’s Deputy Leader.

Wouldn’t that be handy to know?

Because ACT are off the scale right-wing nutbags, the sort of party that makes the Hunters, Shooters and Fishers, the now Campbell Newman led Liberal Democrats, Fred Nile, and One Nation look like left-wing sooks.

We shouldn’t be surprised I guess.

Once upon a time The Australian was the most respected newspaper in the nation, a bastion of intellectual rigour, highly skilled and balanced journalism, and most of all a stickler for the truth. Now it is just a one-eyed rag written by self-appointed experts (the NSW courts words, not mine) who accuse people of murder without trial, hate the ALP, and spin bullshit in almost every story and web.

Why wouldn’t they conceal the truth about who Muriel Newman really is?

After all, every horse that isn’t doped runs to form.

Even the ones that the dopes run.

* I say largely because there some good people there too, including a couple of my mates and a few well-known NZ racing figures who work hard, do good, and have never been on welfare in their lives. Many of them are smart people – most who rationally express their disagreement with panicked, non-fact based government responses to the COVID epidemic are – and they went to the protest on intellectual grounds and with great intentions. But a minority up against the mob is always going lose, even when they and the mob are fighting for the same cause. This small number number of good, well-meaning protesters forgot one thing – If you lay down with dogs you get fleas. It’s just the way it is, and the way it will always be.