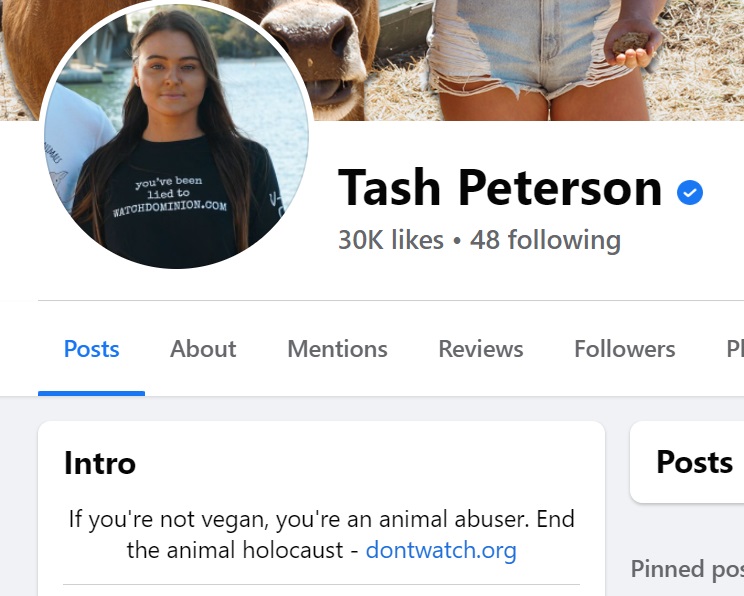 Since when do we take advice on morals and ethics from two bit hookers?

Look if people want to be vegans that’s their business, just as it is mine to choose to eat medium rare steaks. It’s a free world, and people can do whatever they want to as long it is legal and it doesn’t hurt others. Live and let live, viva la difference, and thank the gods of luck and fate that we live in Australia, not Russia or the Ukraine.

It’s when the vegans try to force their speciesism crap down other people’s throats and start screaming at us and calling us murderers that I jack up, because it’s crossing a very, very big line, and there is no excuse for it at all. We don’t try to force feed these deluded fools bacon and eggs or KFC do we? So what right to they have to push their beliefs down our throats, or label our mums or kids as killers just because they like a lamb chop once a week?

Just as they have no right to be fomenting secret plans to disrupt the Million Dollar Chase, because they are their telephone box sized group of deluded fellow travellers believe that greyhound racing is devils work.

Make no mistake, this is exactly what the animal activists are doing, no ifs no buts no maybes. This cult of cabbage eaters have worked up a plan to infiltrate the crowd at the big race under the guise of being ordinary Australians who have come out for a night of good, affordable family entertainment, and for the chance to win a million bucks in the big draw.

These haters and wreckers plot is to cause havoc and mayhem to try to shut the race down, and to deny the working class punters their hopes and dreams of getting lucky and winning enough to buy a house. Like wolves they are going to try to slip into Wenty on Saturday night in skirts, collared shirts, blouses and jeans, and then rip them off to expose the t-shirts they are wearing underneath bearing slogans that slag off the sport and every normal who is there.

Then – inspired by the equally loony fringe climate activists who have been running on too footy fields – their big plan is to invade the track Emily Pankhurst style, and like then do what these fools who stop peak hour traffic do, and sit down on the track so that the Chase race can’t go ahead.

This is not supposition, it is mail received from a source inside the activist cells. The stupid vegans don’t realise that they are not the only ones who infiltrate the presumed enemy. There are greyhound people in their ranks working undercover too.

The word from the inside is that come Saturday night it is all on. These haters of average Australians and everything we like and do are going to make their big run, literally and figuratively. One group of them is going to play the distraction and holler and shout and make a lot of noise, while the other is going to jump the fence while the security guards are distracted, and bolt to the front of the boxes.

That showpony sex worker with the saggy tits who thinks she’s beautiful Tash Peterson is on her way to Sydney as we speak, and will be ripping her gear off like she always does and trying to steal the show. No doubt she will have menstrual blood smeared across her naked form as some of warped symbol of something that she thinks is important, which in truth is more about promoting the slag’s Only Fans subscription site where she performs sex acts online for cash than it about animal rights, but never let the truth get in the way of a good story, or a bad one as the case may be.

Peterson will be joined by about a dozen others, because that’s all the numbers they have got, but small armies can cause untold damage if they catch their targets by surprise, which is what they are hoping to do.

Loose lips sink ships, and you idiots aren’t half as smart as you think your are.

I just hope that the bloke who crash tackled the pitch invading bird at the footy a few weeks ago is on duty at the track, and that they bring in Jimmy Maher and Sam Kerr to work the fence beside him. A good old fashioned shoulder charge or spear tackle might knock some sense into these fascists who believe they have the right to tell the rest of us all what to do, and think its okay to call us savages and piss all over everything that we hold dear.

Well I have a message for them.

There are going to be tens of thousands of good people out at Wenty on Saturday night, and they are not there to be hassled by these jackboot wearing wankers who hate everything that the rest of us hold dear.

C;mon out Tash Rash and your band of merry vegans, and do your very best.

We’re awake to your plots and schemes and tricks, and we are ready and waiting for you.

And put your tits away luv, before you trip over them. 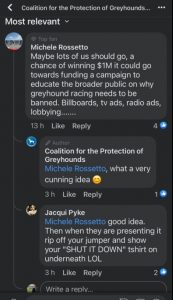