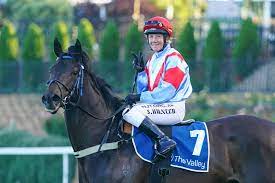 I was chatting to a well-know fella that I share a love of true crime and racing with the other day (both of us on the side of light, or him anyway), and we were discussing the punt.

When sharing his tips for the Bendigo meeting two days hence, the man gave me three.

One was his, and he was hopeful.

But this is was his true summation of the the race.

The goodish bet in that race is Lord Domino, trained by my favourite trainer P Burgun and ridden by his Mrs, Australia’s oldest female pro jock, Shirley Hunter, whose ROI is running at about 13% because they nearly always win races at double figure odds.

At the time of the tip Lord Domino had opened up at $20.

I missed the price, but I backed the winner, only on the off chance that it won, and to prevent him from gloating.

It was a forlorn hope.

I haven’t heard from him yet, but I can feel him smiling from 3000km away.

And winners are grinners.

Sir, you are one.

The question that remains is this.

Did he back it?

I hear the connections did.