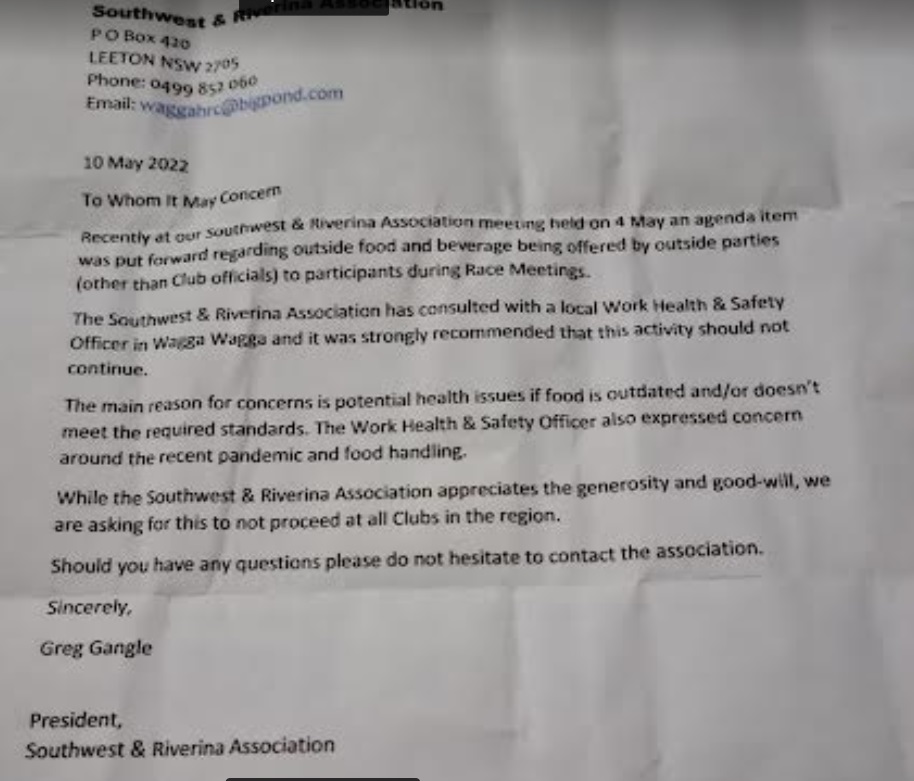 Until recently a community minded harness racing lover named Christine Clement used to – out of the goodness of her heart and for no personal reward – but a hundred dollars a week worth of sandwiches and cakes from the club run canteen at the Wagga track, take them down to the stables, and share them out among the trainers and drivers in between races.

There was no hidden reason for Christine do it, it was just a lovely gesture of great trotting community spirit, a bit of giving something back to the sport that has given she and her family so much joy, and an old fashioned Aussie shout.

The woman deserves a medal.

Instead, the anti-vaxxer Canadian blow-in of a new club CEO Greg Gangle decided to ban the practice.

Two days ago he handed Christine an unsigned letter marked ‘To Whom It May Concern’ which advised her that no longer was she permitted to share the tucker that she buys at the club tuckshop out of her money with her mates down at the stable.

To Whom It May Concern?

Gangle claimed in his letter that a Wagga Wagga City Council Health and Safety Officer – who had nothing to do the matter until he rang them – had advised that it was strongly recommended that the shouted food sharing should not continue.

It was Covid, food handling safety, concerns about out of date products being purchased, and worries that the food Mrs Clements bought at the canteen may not meet standards.

Now all of this is absolute bullshit.

There is nothing under either Council or State laws or by-laws that restricts the voluntary provision of food by one group of friends to another, or requires people to get a license if they want to buy sangers and cakes from a race track canteen, or anywhere else, to share with their friends.

That is stating the bloody obvious, because if there was then the great Australian tradition of bringing a plate to a party or some meat or salad to a BBQ would be banned tomorrow, and the nation would up in arms in outrage.

The Council has nothing to do with it anyway. It only regulates commercial food providers like the club canteen, not customers who buy food from it.

Which means that going to ask a Council health and safety officer to ‘consult’ with them about an issue that is not within their purvey is like going to ask the disgraced former Wagga MP Darryl Maguire about integrity and how not to be a love rat who uses a desperate and dateless Premier to push projects through for his mates so that he can get a sling.

Nevertheless CEO Greg Gangle did it, but not for the reasons that he pretends he did.

You see a while back Gangle – who obviously has delusions of Wagga grandeur that don’t match reality – tried to get the programming changed so that lower grade horses were forced off the cards at the track and pushed back to the bush.

Wagga was a premium track he reckoned, forgetting what country he was in, and what country town, and seemingly ignorant of the fact that every premium club in all of the three codes runs maidens, fifth grades and Class 1 and 2’s at their meetings.

Why Peter V’Landys has made an artform of supporting lower grade country trainers, and sets aside two races at every Saturday metro gallops meeting for them to race for prizemoney of $100 000.

I very much doubt it.

The trainers jacked up, and Christine being a quietly spoken leader who leads by example was the one they went to for advice and action. She listened, and took up the cause, starting a petition in support of retaining pathway races that gained hundreds of signatures, and inspired the club board to force Gangle to back down.

He’s obviously taken it personally as a slight, felt like he has lost face, and never forgotten it.

The ban on Christine Clement’s shout is a square up.

A really juvenile one, and a totally dumb one too.

If Christine’s buying from the canteen, and the council’s alleged worries that the food might be out of date, below standard, or not handled properly were proven correct, then whose fault would that be?

Christine the customers, or the club canteen the seller?

The council licenced canteen of course.

Has the council come out to inspect the canteen, its food, facilities, and handling practices?

Of course not, because Gangle didn’t tell them that Mrs Clement was buying the food from the canteen did he? He just told them that she was bringing down food to the stables and sharing it out.

How do I know this?

Because I rang the Council yesterday afternoon to ask the question, and I got the answer.

Gangle spoke to them alright, but the advice they gave was not based on the true circumstances of Mrs Clement’s largesse, mainly how and where she obtained the food that she shared, and from whom.

The Council told me that sharing a shout wasn’t a problem at all.

So someone is lying aren’t they?

I’m pretty sure it’s not the Council.

So by logical deduction it must be the CEO.

Naughty, naughty Gregory, we don’t do those of things out here in the Australian bush, it’s not our go.

Of course Mr Gangle may elect attack as his best form of defence when he learns of this story, and claim that what we are saying here is not true.

All he has to do is get a statement from the Council Health and Safety Officer he says he spoke to, spelling out their advice and telling what information it was based on.

A simple email from the officer of the Council will do.

We’re sure they will have no problem with providing it; after all, it’s their job.

Over to you buddy.

A whole lot of hungry licensees would like to see it.