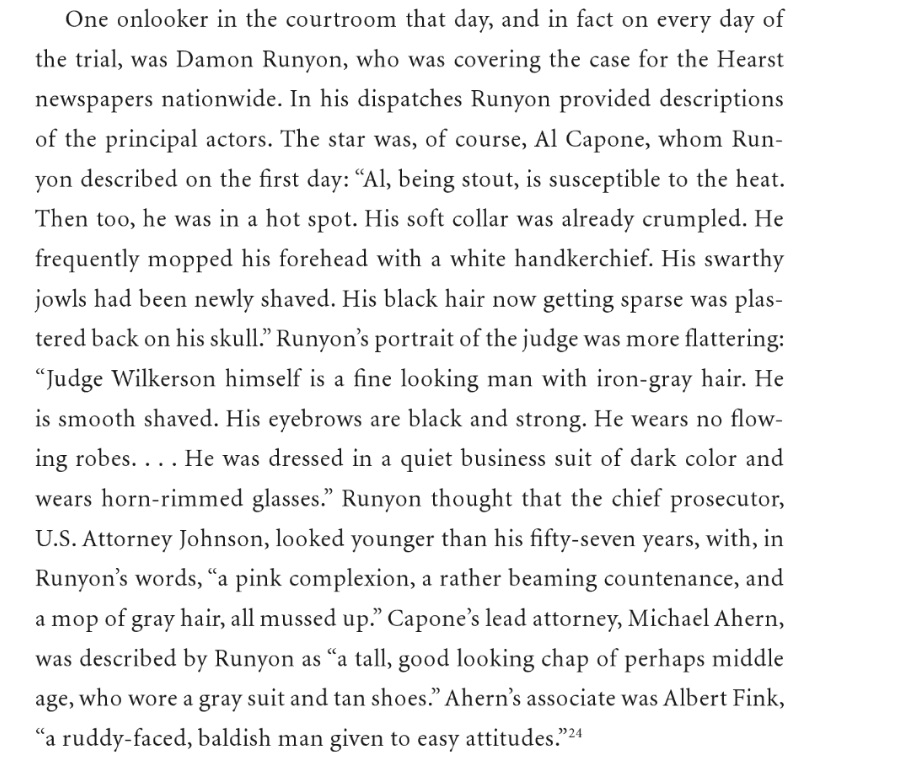 Damon Runyon was, to people like you and me, one of the greatest writers of the 20th century.

As a journalist he covered everything – racing, sport, gambling crime, life, the lot – and he did it all with aplomb.

Sport, the punt and horses aren’t modern day writer Matthew Condon’s thing, but crime is. When it comes to writing about people walking on the other side of the line of the law, he’s your man, the best in the game.

Read Runyon’s piece in the picture about the trial of Al Capone, and then read what Condon’s reporting of the first day of the trial proper of Chris Dawson, the man hung, drawn and quartered by the Hedley Thomas in the best-selling podcast The Teacher’s Pet.

Aren’t the two writers similar in their style of observation, evocation of the scene and what flows during it, and the objective, impartial way that they report on the happenings, and the people involved.

This is how great writers do it.

I wish I could.

If he hadn’t made so much profit from his share of The Teacher’s Pet revenue, Hedley Thomas just might too.

At 10.30am precisely, the first witness, Julie May Andrew, was called. She was petite, wearing a black and red patterned outfit, black stockings, black shoes and a black mask. Her hair was dark and cropped short.

And she too was unflinching. Throughout her evidence she would refer to herself as “not a woman” prone to flattery, prone to be easily influenced, prone to any number of perceived temptations. In short, a straight shooter.

Julie Andrew was a friend and neighbour of the Dawsons in Bayview Heights, on Sydney’s northern beaches. Her property shared a fence line with Lyn’s, and once they became friends they established a shortcut to each other’s houses through a stand of she-oaks.

Both women had young children, and Ms Andrew’s evidence evoked a vanished Australian era: a time when neighbours slipped over and into each other’s kitchens for a cup of a tea and a gossip.

Long, hot summers with children squealing in the pool. Women who stayed at home to look after the kids and lived on tight household budgets controlled by their husbands. Buying things on your Bankcard. Decorating your home with massive ferns spilling frompots hanging from the ceiling. Women wearing G-strings and swimming topless.