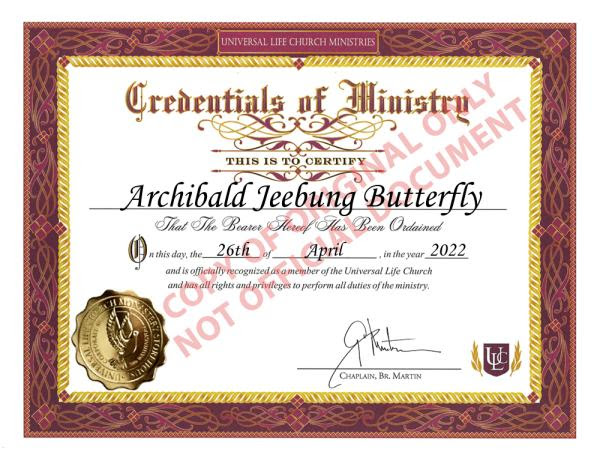 A country and a people as extraordinary as ours deserve a government to match.

A government of competence and integrity.

A government that doesn’t get out of the way but helps to create the way.

A real government is the steering wheel of a nation, not just a bumper sticker.

You can now call me Reverend readers.

Yes, I have made the leap into the world of blind faith and belief, and have accepted the long standing offer of ordination as a Minister of the Universal Life Church.

It’s official, as of yesterday I am an ordained Minister of the church, and I now have the legal right to marry you in eight American states;  Alabama, Illinois, Mississippi, Pennsylvania, South Carolina, Texas, Utah, and Washington.

What do we believe?

Only one thing, just like the modern Labor party.

They believe in good government.

We believe in what’s right.

What is good government?

Who knows? Government that is good I guess.

How can you tell if a government is good or bad if you have no core beliefs or values to judge it against? You can’t, that’s the whole idea.

So tell us about your churches belief in what’s right Reverend.

You go and work that out for yourself sheep of the flock, it’s not our job.

We are all children of the same universe, so find your own path and walk it in love.

The critics hate us. They say that we are mocking the institution of formal ordination based on a system that requires a candidate for the ministry to study mystical bullshit for years about a man, his son, and a ghost, only one of whom (Jesus) has allegedly ever been, and not for the last 2000 years at least.

Of course the critics are correct.

What’s the point of wasting years of your life learning gobbledygook about women being made from man’s ribs, and snakes in gardens tempting nude birds (dildo’s are as old as time), and the whole of humanity descending without incest from just one man and woman and their two sons, and people rising up from the dead, an virgins giving birth, and fathers tying their sons to altars to slay them because the voice they are hearing in their heads tells them too, and the whole word being wiped out by a flood bar some lunatic and his wife and family who sailed around for a month and a half in a leaky boat filled with animals and shit?

All that just to become ordained so you can go an abuse little boys under the literal cloak of respectability, and send out crusaders on mass missions of murder in the name of a God of peace?

These Romans are crazy.

All you have to do is believe in what’s right, and the key to the door is yours.

I can ordain you now, anywhere in the world.

Or baptise or bury you in eight US states.

I’m making Maggie do it.

All you gotta do is believe.

So God created man in his own image, in the image of God created he him; male and female created he them.
And God blessed them, and God said unto them, Be fruitful, and multiply, and replenish the earth, and subdue it: and have dominion over the fish of the sea, and over the fowl of the air, and over every living thing that moveth upon the earth.
And God said, Behold, I have given you every herb bearing seed, which is upon the face of all the earth, and every tree, in the which is the fruit of a tree yielding seed; to you it shall be for meat.
And to every beast of the earth, and to every fowl of the air, and to every thing that creepeth upon the earth, wherein there is life, I have given every green herb for meat: and it was so.
And God saw every thing that he had made, and, behold, it was good.