Finucane Missile was the $2.25 favourite to win the ninth race at Rockhampton yesterday, the second last leg of the Quaddie.

It didn’t seem to be playing up in the barrier, but an attendant got in next to it, and just as they started he grabbed hold of the favourite’s bridle.

As the rest of the field jumped it tried to too, but couldn’t because the barrier attendant wouldn’t let go, and the horse went up in the air and lost ten lengths, at least.

He chased the field, and caught up, and somehow he ended up running about sixth or seventh, beaten only a couple of lengths. If he’d been given a fair start, Finucane Missile would have won by panels.

A $17 shot ridden by Bubba Tilley won the race.

It was a very strange affair indeed.

The trainer of the second favourite Quidni was permitted to remove the blinkers from the horse just before the race, for no reason seemingly at all, other than that the trainer asked and said please.

Each of Quidni’s previous three wins had come when it raced on the speed.

It bounded out of the gates, and looked for all money like landing in a beautiful spot one off the fence and one back, but for some reason its jockey Brad Pengelly put on the brakes just as he was about to lob in the spot, and went back a length and sat 3-wide instead, which was a very strange thing to do when you were riding a horse who was stepping up in distance to 1500m for the first time.

The third favourite North Afrika was a stayer who was 2nd-up for 100 days and stepping up 300 metres in distance. In had never won third-up in it’s life. Jockey Ryan Wiggins took it to the lead, and went a real fast clip for a Class 3 event, setting up a time only 1.5 seconds outside the seven-year-old track record.

Meanwhile Bubba Tilley on the eventual winner got a dream run on the fence behind him, and no-one seemed to want to go anywhere near him until the turn, which makes you wonder whether Bubba didn’t have a cough or a sniffle.

In the straight North Afrika looked like it was going to lug off the track a bit, so Tilley went back to his inside to shoot the gap, but   due to Wiggins best efforts the horse drifted back toward the fence, and Tilley was stuck.

God only knows why (or perhaps some can guess),  but just as they passed the 400 metre mark down the long Callaghan Park straight, when Tilley looked to be in all sorts of trouble bailed up on the fence, Wiggins suddenly decided to hit the go button, and pulled the stick on North Afrika and kicked in a length in front.

It was pretty damn early to go for home, and it let Tilley off his back and around his heels. Wiggin’s leader soon tired, as horses do when their jock goes before the clock tower; Quidni was exhausted from its super tough wide run and just battled; the toll told on the fave who had missed the start 10 lengths; and Bubba’s one slipped away and won.

J. Stanley on the fave was blowing up after the race and wanted to see the film of the start.

After much persuasion, he finally did, and it was clear that the barrier attendant had grabbed his horse’s head and refused to let it go.

There needs to be an inquiry into that barrier attendant’s actions, pronto.

The fave was declared a non-runner.

All the double, treble and quaddie money went on the sub-fav, the one that Pengelly had inexplicably planted wide.

The whip horse Raiden – the one that the Chairman of Stewards had refused to protest against – had won the first leg of the Quadie, ridden by Pengelly.

The fave had won the second, ridden by Wiggins.

Bubba’s horse won this one, with all the mugs money on Pengelly’s.

Bubba won the last too, on a fave.

The corporates pay out winners on the dividend on the Vic Tote.

The treble is only bet in QLD and the corporate bookies pay UBET’s dividend. It paid $255. Someone or ones got it twenty times.

The First 4 on the funny race 9 paid $2280, even though there was only $740 in the pool. Whoever the lucky UBET punter was got it for just 30 cents, but down south in Victoria where it paid $2535 some lucky buggers got it 3 times.

Only its not a gag.

Don’t bother checking the bookie sheets Stewards, not I am sure that you will.

You’d be looking at the wrong ones anyway.

If the betting sheets were mirrors, they’d be looking back at the wrong ones too. 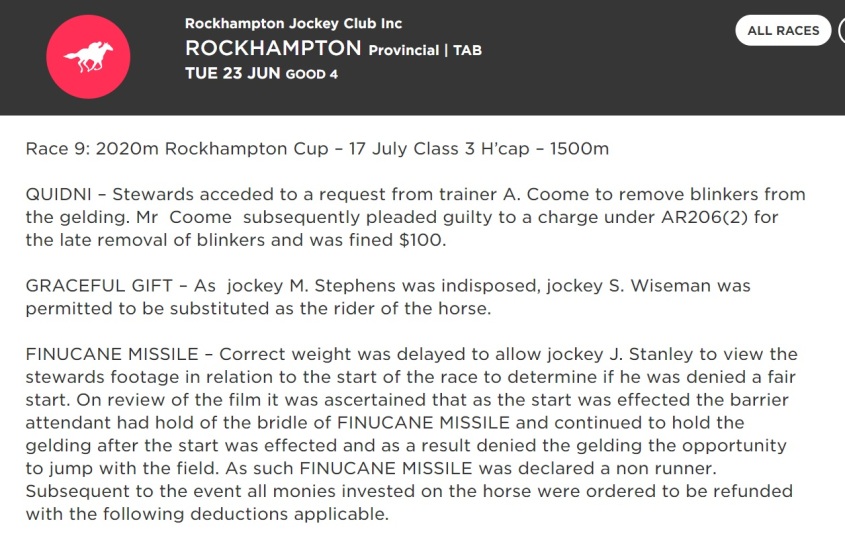