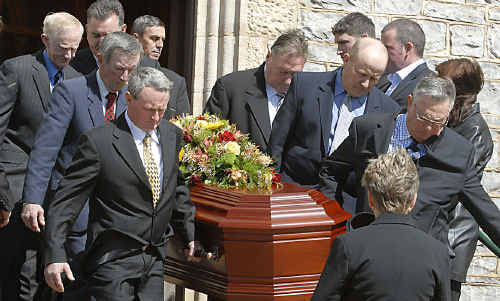 Barry at the back left carrying Jim Atkins casket. I can hear the great J.J. up in heaven laughing in delight for his great mate right now.

Barry Squair is a lovely bloke.

He’s President JC Catton from Capalaba’s uncle, his Mum’s brother, and I’ve known him since I was a kid, back in the days when he was Queensland’s tallest jockey and kicking the toppies home at Clifford Park.

Young Barry doesn’t have many horses running around at the moment, only two,  but he killed them today in the Dane Ripper with the best of the pair I Love Lucy, and unless I’m mistaken I believe that he picked up his first Group 2 winner in the process. No-one in racing deserves it more.

He’s on the upward side of 80 these days is Barry, but this Catton/Squair mob are made of tough stuff, and until a couple of weeks ago the young bloke was still out there every morning riding Lucy and her stablemate Toorak Comedy in work. He still would be too if he hadn’t come off in work a couple of weeks ago and broken his shoulder, but the second its mended its London to a brick on that he’ll be back in the saddle and out there again.

Mrs Squair is pretty happy this afternoon too, both for her husband of sixty odd years brilliant achievement to win one of the best mares races on the Queensland calendar, and because she was a half share in the 100 each way Barry whacked on Lucy at $42. There will be a very well dressed roast chook on the dinner table at the Squair’s tomorrow night for sure.

Good on you Barry!

Now down to Melbourne for the spring!