Angus Garrard may be just sixteen years of age, but already he is one of Queensland’s top ten harness race drivers, and he’s made it into the elite class without even being able to drive at Albion Park on a Saturday night,.

It’s an extraordinary achievement at any age, but to make it into that grade as a reinsman when you’re still at school attending classes during the week is something just out of this world.

Allow me to put it into perspective by taking away the top ten drivers metropolitan wins to put them on an equal footing with Angus Garrard, just so that you can understand the magnitude of what this wunderkind has achieved in just his first full season of professional competition.

This is what the leaders ladder looks like with metro winners out:

Equal seventh spot. Now that is something special isn’t, and what makes Angus’s efforts even more impressive is that drivers of the ilk of Kylie Rasmussen, Robbie Morris, Trista Dixon, Chantal Turpin, the Elkins brothers, Hayden Barnes, John Cremin, Kelli Dawson and Lachie Manzelmann haven’t even cracked the top ten.

Wow! And the kid doesn’t even turn seventeen until June.

Ladies and Gentleman, a star is born.

Can sometime please tell the QRIC?

They’ve knocked Angus Garrard’s application for a metro drivers license back. Twice. Once when he originally applied in November, and then again in January on internal review.

Who knows. The published decision doesn’t provide a reason, but the Stewards clearly need their heads read. Their stance in blocking the superstar kid’s transition to the metropolitan driving ranks is akin to the Indian selectors refusing to allow Sachin Tendulkar to play test cricket at 16, or the NZ stipes barring J-Mac from riding against all comers at the same age.

It’s madness, that’s what it is. The only reason that I can imagine is that it’s age-based discrimination, for as the adjusted table above – on which Garrard sits just 8 wins shy of multiple premiership winner Grant Dixon – clearly shows, it can’t be due to his lack of skill in the cart.

Let’s just hope Angus Garrard takes QRIC on at QCAT and rolls this ridiculous decision to refuse him a full license, for a talent like his is far too precious to be wasted sitting at home watching television on a Saturday night.

The kid’s a star. 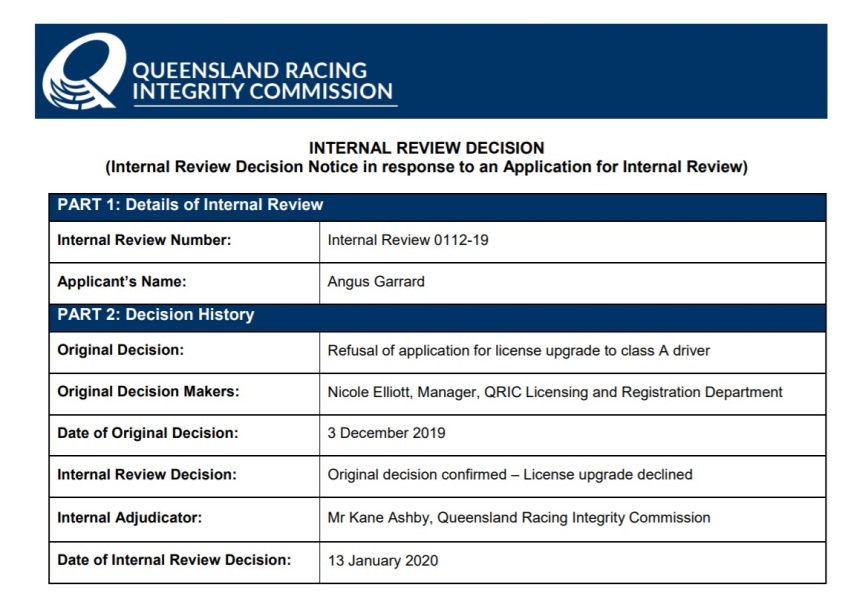